Consider the sweep of Roger Daltrey’s career: Rock and Roll Hall of Fame front man for The Who, one of the most influential groups ever; Golden Globe-nominated film actor (“Tommy”); and fashion icon when London was mod and swinging. Whoever first coined “He’s a rockstar” as shorthand for boldfaced success could easily have had Daltrey in mind.

Jim Axelrod asked Daltrey how long it took him to get used to grand-scale fame. “About 50 years!” he laughed.

Now pushing 75, Daltrey is at the point where he’s considering not just his career, but his life – and for the first time, he’s looking back on it, with a memoir called “Thanks a Lot, Mr. Kibblewhite” (Henry Holt), a title that nods to the source of his ambition: his school principal who threw him out at the age of 15 for misbehaving.

Daltrey said, “There was that moment when he kicked me out of the school. And as I was going through the door with my back to him, he said, ‘You’ll never make anything of your life, Daltrey.’ And that was it. If he hadn’t have said that, maybe I wouldn’t have made anything of my life.”

Born in a working class neighborhood in London, Daltrey met a couple of schoolmates – Pete Townshend and John Entwistle – who shared his love for Elvis, Bo Diddley, and the Everly Brothers.

Daltrey pointed out to Axelrod the house where he’d lived from age 11 until he left home. “This is the house where I made my first guitar, and that room up there was my mother’s bedroom, that’s where The Who started. We made hell of a racket! The neighbors never complained; they were so happy I gave up the bugle and started a band!”

They would refine that “racket,” add drummer Keith Moon, and build a sound around Townshend’s hard-driving chords that spoke to teenagers’ rage, angst and isolation.

The Who’s music was different from what The Beatles and Rolling Stones were producing. “Yeah, this was in-your-face stuff,” Daltrey said. “And the stuff that came from the inside of youth of the day.”

While the chemistry clicked, they’d go on to sell 100 million records, it was a combustible mix. “It was a very volatile group of people,” said Daltrey. “We were more like a gang, we much more like a gang than a group,” he laughed.

The band’s success was matched only by its excess – a threat that constantly shadowed The Who from the beginning.

“We went on our first European tour and they started taking amphetamines and all kinds of drugs,” Daltrey recalled. “And the last show, they were playing things so fast and I couldn’t get the lyrics in. I said, ‘I’m gonna put a stop to this.’ So, went straight into the dressing room after the show, raided Keith Moon’s suitcase and flushed it all down the toilets!”

But the drugs never really went away. Keith Moon fatally overdosed in 1978. “I wish we could have saved him,” said Daltrey. “I mean, knowing what we know now about drug abuse and rehab and all that, we might have done better.”

That left just Daltrey and Townshend, who don’t actually see much of each other these days.

Axelrod asked, “So after half a century working so closely with this guy, it’s never ring him up and go get a beer and talk about life?”

“No, [we] don’t have that kind of relationship. We never did. We did in the very early days. We used to, after gigs, we used to go fishing, used to play golf.”

“Any part of that sad to you?”

“Not really, ’cause I had it with him once. If he ever wanted to have it again, he would make an approach but I don’t want to play golf. I still go fishing!”

Still, the two remain linked by something other than their music.

For decades Daltrey and Townshend have given their names, money and time to building teen cancer units in hospitals across the U.K., and now in America, including at UCLA Medical Center in Santa Monica.

“A lot of people don’t realize that they get the rarest and most aggressive cancers,” he said of the young patients.

Daltrey feels passionately that medicine was treating teenagers the way music did before rock and roll: as either kids or adults, when actually they are neither.

One patient told Axelrod, “We’re trying to achieve independence when we’re our age, and getting locked up in a hospital isn’t like a great way to go about doing it, so it’s nice to be given something like this.” 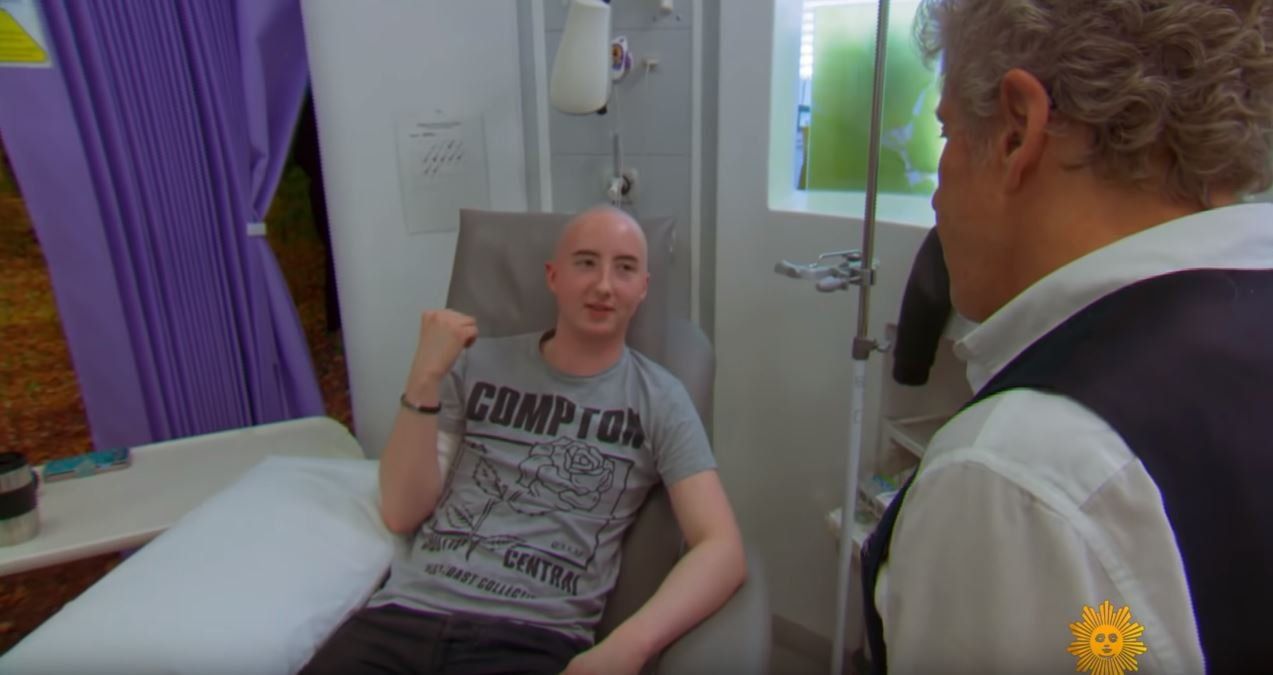 Call it a payback to the fans who formed a foundation to The Who’s success. “Without the support of that age group, there would be no music business, full stop,” Daltrey said.

At a time of life when many stars might be focused on their legacy, Roger Daltrey doesn’t appear particularly concerned. When asked if he ever saw the inspiration for his memoir’s title, Mr. Kibblewhite, again, Daltrey said, “No. I don’t know if he’s still alive.”

“He must have known Roger Daltrey made something of himself,” Axelrod said.

“Thanks a Lot Mr Kibblewhite: My Story” by Roger Daltrey (Henry Holt), in Hardcover, eBook and Audio formats, available via Amazon

The Who (Official site)